Tues, Aug 18 – Should America Give Up Global Military Dominance? 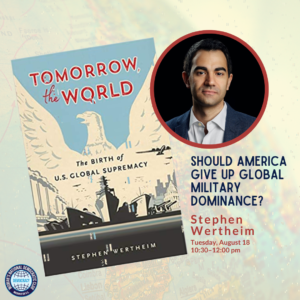 As the 2020 election looms, America’s role in the world is up for debate like never before. A few decades ago, Americans were told their nation possessed unchallenged dominance and could police the world at minimal cost. Today, the result is endless war and disinvestment at home—with discontent rising on both the left and the right.

Previewing his forthcoming book, Tomorrow, the World: The Birth of U.S. Global Supremacy, historian Stephen Wertheim discusses the history behind America’s desire to be the world’s top political and military power. Now, however, the United States lacks a rationale for its military primacy and faces a stark choice: pull back or face mounting conflicts in the century to come.

Register for this Zoom event.  Donations to support our Employee Benefit Fund are welcome.