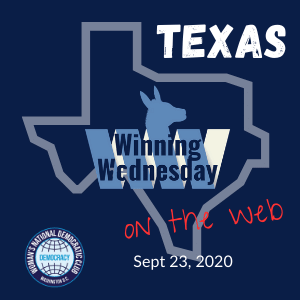 For decades Texas has been considered a Republican stronghold in the Presidential or US Senate races; however, wins by numerous Democratic House candidates in 2018 plus recent polling showing fallout with Republican voters over both Trump’s and Governor Abbot’s poor handling of COVID-19 have changed that calculation.

In 2016 Clinton lost by nine points here, but in 2018, Beto O’Rourke lost to Ted Cruz by a mere three points. Changing demographics and college-educated suburbanites have made this turnaround possible.  The dangerous challenge is ongoing efforts by Republicans to suppress Democratic votes, attributed to years of gerrymandering and recent wins in the state legislature and court battles, whose rulings have delivered a huge blow to voting rights.

Some good news, however: Both the July 14th runoff and the previous Super Tuesday primary brought out a record number of voters, even though 100’s of polling stations had been closed. Also, the number of voter protection organizations to level the playing field in this state has increased to ensure as few people as possible are disenfranchised. WNDC is supporting these efforts in a partnership with Reclaim Our Vote.