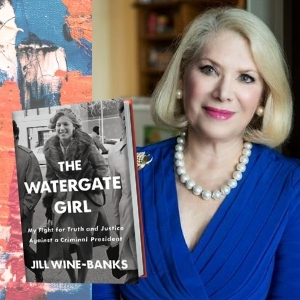 At the age of 30, Jill Wine-Banks was a Watergate special prosecutor and the only woman on a team that exposed the corruption in the White House that resulted in the resignation of a US President. Join us for what promises to be a lively lunch time discussion with Jill about her book The Watergate Girl: My Fight for Truth and Justice Against a Criminal President and reflections on her career, the sexism and challenges she faced, and why the current assault on democracy worries her more than Watergate ever did. Bring your questions for this exciting lunchtime special exactly six weeks before one of the most consequential elections in modern history. It’s anyone’s guess what the news of the day will be, but regardless of the topic, you can count on Jill for her trademark straight shooting, right to the point analysis on the state of play.

Jill Wine-Banks’ career has been a litany of “firsts” for women—she was the first female trial attorney in the Organized Crime and Racketeering Section of the U.S. Department of Justice, and from 1973 to 1975, she was the only woman on the Watergate special prosecutor’s trial team. Soon after the conclusion of the Watergate trial she was named the first woman to serve as General Counsel of the Army. She is currently an MSNBC Legal Analyst, appearing regularly on primetime and daytime shows. She also appears on PBS, Canadian and Australian networks, Sirius XM, NPR, and other radio shows and podcasts. A sought-after speaker, Jill appears before professional, political, women’s and business groups, universities, and law schools. In addition, Jill has written OpEds for major outlets including NBC.com, Chicago Tribune, Washington Post, Politico, and Huffington Post.

Register for this Zoom event. Donations to support our Employee Benefit Fund are welcome.