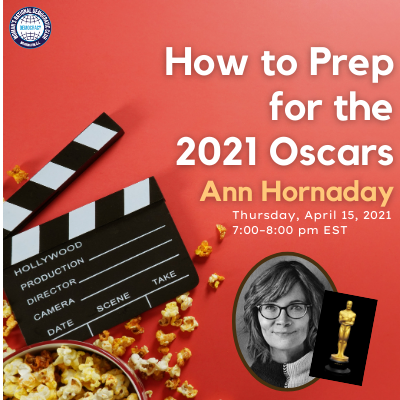 In February 2020, movie critic and award-winning author Ann Hornaday delivered her review of the 2020 Oscar front-runners. Hornaday focuses a keen eye on the glittery world of Hollywood media and the impact of “billion-dollar blockbusters” on pop culture and global storytelling. Hear from this Pulitzer Prize finalist about the state of Hollywood and the 2021 Oscars after a year in a global pandemic. Full program details to follow.

Ann Hornaday is from Des Moines, Iowa and received a degree in Government from Smith College. Hornaday is the author of “Talking Pictures: How to Watch Movies.” After working at Ms. magazine as a researcher and editorial assistant, she became a freelance writer in New York City, eventually writing about movies for the New York Times Arts & Leisure section and other publications. Since 1995, Hornaday has been a movie critic for the Austin American-Statesman in Austin, Texas, as well as the Baltimore Sun and the Washington Post. She was a finalist for the Pulitzer Prize in criticism in 2008.