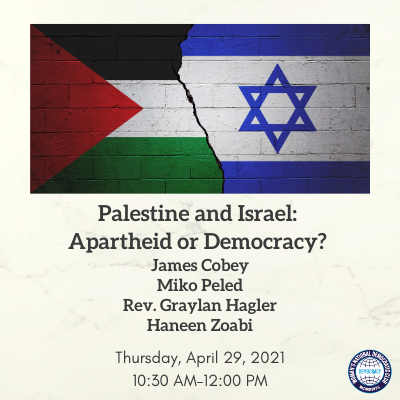 Dr. Cobey will moderate a discussion with Miko Peled, Rev. Hagler, and Haneen Zoabi on the prospects for peace in the Palestine/Israeli conflict. The panel will discuss the present political situation in Israel and Palestine and how to achieve equal justice for all Israelis and Palestinians, particularly as the two-state solution may no longer be possible due to Israeli settlement policy.

Dr. James Cobey earned both his MD and Masters in Public Health from Johns Hopkins University. As a surgeon and epidemiologist, he performed the first epidemiological study of land mines in Cambodia. His study led to the founding of the International Campaign to Ban Land Mines which received the Nobel Peace Prize in 1997. He is a recipient of the Charles R. Drew Award from the American Red Cross, American Red Cross’s International Humanitarian Service Award, Distinguished Alumnus Award from Johns Hopkins University, and Global Humanitarian Award from Johns Hopkins University. He has taken multiple trips to Palestine to provide medical care and evaluate issues on human rights.
Miko Peled is a writer and human rights activist born and raised in Jerusalem. Many consider him to be one of the clearest voices calling for justice in Palestine/Israel. Driven by a personal family tragedy to explore Palestine, its people, and their narrative, he has written a book about his journey called The General’s Son, Journey of an Israeli in Palestine. In the forward to the book, Pulitzer prize-winner Alice Walker writes: “There are few books on the Palestine/Israel issue that seem as hopeful to me as this one.” Miko has a blog, mikopeled.com, and a podcasz, the Miko Peled podcast, both of which provide a platform to important and lesser-heard voices.
Reverend Hagler studied at Hampton University, Oberlin College, and The Chicago Theological Seminary. He has served as a community organizer in Chicago, Roxbury, Massachusetts, and Washington, DC. He worked for civil rights in South Africa, advocated for Mozambican autonomy and ending the embargo against Cuba. He is part of the Washington, DC leadership team for the Poor People’s Campaign. Currently he is the Senior Pastor at Plymouth Congregational Church in Washington. He has traveled to Palestine.
Haneen Zoabi was born in Nazareth to a Muslim family. She studied at the University of Haifa and the Hebrew University of Jerusalem. She has taught mathematics and worked as a school inspector for the Israel Ministry of Education. After an intensive effort to disqualify her, she was elected to the Knesset for 10 years. She participated in the Gaza flotilla. She advocates for a single state with equal rights for all.