POSTPONED: What We Don’t Talk About: Sex and the Mess of Life 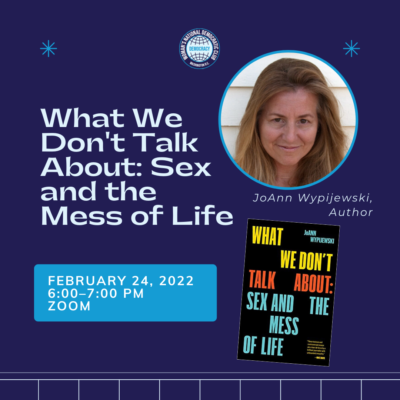 This program has been postponed until the spring. Please email our Program Committee Director at programs@democraticwoman.org with any questions.

Writing at the confluence of sex, class, race, and the criminal legal system, writer and editor JoAnn Wypijewski posits that sex scandals have managed to unite people across the ideological spectrum in the “shape-shifting politics of fear”—fear that has been fanned to “devastating effect.” In her most recent book, a collection of essays, What We Don’t Talk About: Sex and the Mess of Life, Wypijewski indicts modern sexual politics and discusses the myriad ways sex panics and the expansion of the punitive state are intertwined. From frenzies over satanic ritual abuse in the 1980s and 90s to QAnon’s dark warnings that a conspiracy of pedophiles controls global politics today, Wypijewski will examine contemporary political scandals and their effects; the absence of any real sex education in America, a retribution-focused justice system, mass incarceration, and more.

Wypijewski has spoken at universities and political conferences around the world. For eighteen years, from 1982 to 2000, she worked at The Nation, beginning as a proofreader, and holding the titles of copy chief, managing editor, and senior editor. She has written for that magazine as well as for Harper’s, New Left Review, Ms., CounterPunch, The New York Times Magazine, Il Manifesto, Elle, the LA Times, and other publications. Her article “A Boy’s Life” (Harper’s, October 1999) won the GLAAD Media Award for best magazine article of the year. Her report on the trial of the only officer to be prosecuted in the Abu Ghraib scandal (Mother Jones, March/April 2008) was a finalist for a National Magazine Award and a Molly Award. From 2005 to 2007 she was a regular columnist for Mother Jones. She is the recipient of a Lannan writing fellowship, the James Aronson Award for lifetime achievement in social justice journalism, and the Rona Jaffe Writer’s Award.