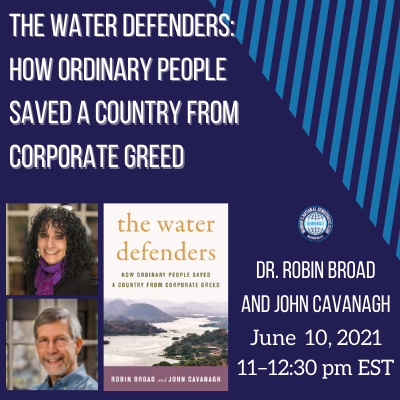 A US Role in the World Series Program

Join Dr. Robin Broad and John Cavanagh for a discussion of the larger political and policy issues raised by their book, The Water Defenders: How Ordinary People Saved a Country from Corporate Greed. This book tells the story of community groups in El Salvador that joined forces with international allies to defeat a corporate lawsuit in a DC-based tribunal. This resulted in El Salvador becoming the first country in the world to save poisonous pollution of its rivers by instituting a ban on mining. Broad and Cavanagh will share the lessons of their story, one replete with corporate greed, unlikely allies, violent threats, murders, and, surprisingly, victory. They will also discuss the relation between mining and the flow of refugees from Central America to the US border.

Dr. Broad is a Professor of International Development at American University’s School of International Service. Previously, she served as an economist with the US Treasury Department and Congress working with civil-society organizations in developing countries. She has a BA from Williams College and an M.A. and Ph.D. from Princeton University.

John Cavanagh currently serves as Senior Advisor to the Institute of Policy Studies after being Director since 1991. Prior to joining IPS, Cavanagh worked as an economist for the UN Conference on Trade and Development and the WHO. He has co-authored 11 other books and numerous articles on a wide range of social and economic issues, including Global Dreams: Imperial Corporations and the New World Order (with Richard Barnet). He serves as Chair of the Fund for Constitutional Government and is senior advisor to the Poor People’s Campaign. He has a BA from  Dartmouth College and an MA from Princeton University (where he met Robin).