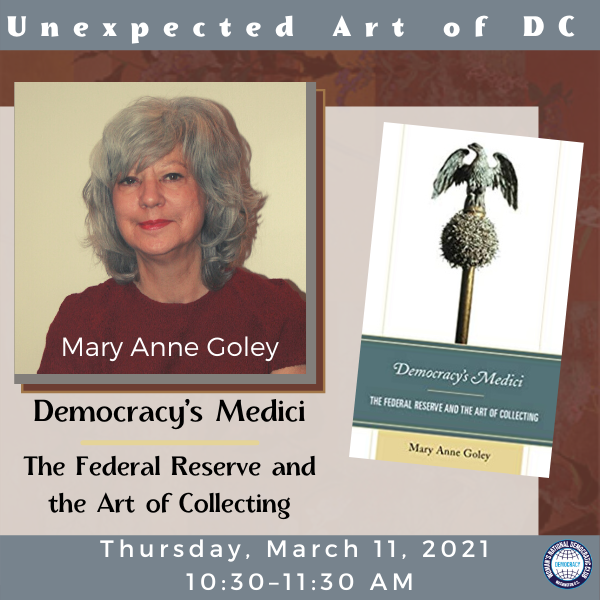 Democracy’s Medici—The Federal Reserve and the Art of Collecting

From the viewpoint of her decades-long tenure as the founding Director of the Federal Reserve’s Fine Arts Program, Mary Anne Goley takes us through the years during which she built from scratch one of Washington’s most remarkable art collections. Over thirty-one years, she organized over 110 exhibitions on subjects ranging from NY graffiti artists to the 2006 exhibit: The Face of Contemporary Art in China. Goley added a diplomatic mission by working with central banks and museums across the globe to bring exhibits to the Federal Reserve. Join us for a closer look at the hidden art of “official” Washington, its role in soft diplomacy, and the larger-than-life personalities behind it all.

Click here to register for this series kickoff of Unexpected Art of DC!

In 1975, Mary Anne Goley began her art-historical career as the first Director of the Federal Reserve Board Fine Arts Program. During her 31-year tenure, Goley organized over 110 exhibitions on a range of subjects from New York Graffiti artists to the first U.S. exhibit of Charles Rennie Mackintosh. Adding a diplomatic mission to her portfolio, beginning in 1988, Goley worked with central banks and museums in Austria, Greece, Hungary, Israel, Poland, Romania, Spain, Switzerland, and The Netherlands to bring exhibits to the Federal Reserve.

Scholarly contributions included the exhibitions: The Hague School and Its American Legacy, The Paintings of Eduard J. Steichen, Austrian Biedermeier, and Polish Constructivism, among others. In 2006 Goley organized The Face of Contemporary Art in China, the first of its kind in Washington, DC, for the Federal Reserve Board. She was twice knighted, in 1982 by Queen Beatrix of The Netherlands and in 1988 by the Grand Duke of Luxembourg.

Goley’s recent book, Democracy’s Medici: The Federal Reserve and the Art of Collecting, was published in October of 2020.