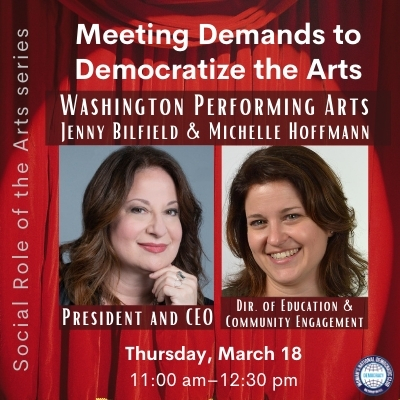 A SOCIAL ROLE OF THE ARTS SERIES

The current times have surfaced long-established inequities in American history; and in turn, many arts organizations have been prompted to reflect upon their own roles in this history and to take action—beyond public statements of ally-ship and empathy. With this in mind, the presentation will offer a view of how Washington Performing Arts (WPAS) expresses its commitment to the unifying power of the arts and—through programming, arts education, governance, and staffing—to its founder Patrick Hayes’ commitment to “everybody in, nobody out.” Video will accompany the presentation and discussion.

Click here to register for this event in the Social Role of the Arts series.

Jenny Bilfield is the President and CEO of Washington Performing Arts. Based in Washington, D.C. and founded in 1965, WPAS has long been one of the nation’s preeminent multi-disciplinary arts presenters and was the first organization of its kind to receive the coveted National Medal of Arts, conferred by President Obama at the White House. Her many contributions to the arts have been acknowledged with a number of awards and recognitions, including ASCAP’s Adventuresome Programming Award and the Helen M. Thompson Award for orchestra leadership from the League of American Orchestras. She has been praised as one of nation’s 30 Key Influencers in the Arts: Movers and Shakers by Musical America. Her programming at Stanford Live was included in the San Francisco Chronicle’s list of the top 10 Notable Classical Music Developments of the Decade. Since arriving at Washington Performing Arts in 2013, Bilfield has three times been recognized by Washingtonian magazine as one of the Most Powerful Women in Washington (2013, 2015, and 2017).