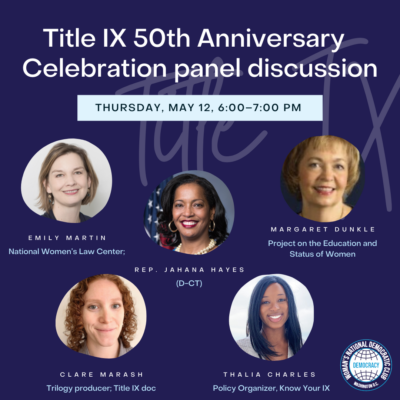 Recall the early years of the women’s movement and how women leaders made history with Title IX by prohibiting sex discrimination in schools and other educational programs that receive federal funds. Learn where Title IX stands today in every aspect of our lives—employment, education, and beyond—and where we need to go to reach Title IX’s full potential. Rep. Jahana Hayes (D-CT), our moderator, will be joined by longtime women’s advocate Margaret Dunkle, Emily Martin (National Women’s Law Center), Thalia Charles (Lafayette College & Know Your IX), and Clare Marash (writer & Trilogy producer).

About our moderator and panelists:

Rep. Jahana Hayes is the US Representative for the Fifth Congressional District of Connecticut. She is the first African-American woman and the first African-American Democrat to ever represent the state of Connecticut in Congress. In her capacity as 2016 National Teacher Of the Year, Hayes traveled the country and the world as an ambassador for public education engaging all stakeholders in policy discussions meant to improve outcomes for students. She has been quoted as saying that “education saved her life” and is a fierce advocate for ensuring equitable access to educational opportunities for all students and families. In 2021, Rep. Hayes introduced the Title IX Take Responsibility Act with longtime friend of the Club, Representative Debbie Dingell (MI-12).

Margaret Dunkle is a national member of WNDC and played a key role in implementing Title IX, the 1972 law that transformed education for women and girls, from athletic fields to graduate schools. She joined the Association of American College’s Project on Women in 1972, working hand-in-hand with Dr. Bernice (“Bunny”) Sandler, the Godmother of Title IX.  Dunkle’s groundbreaking 1974 report documenting discrimination against female athletes became a blueprint for the Title IX regulations on athletics.  She was the first Chair of the National Coalition for Women and Girls in Education, which led the successful 1970s fight for strong Title IX rules. She went on to document discrimination against pregnant and parenting students and commission the 1992 study How Schools Shortchange Girls.  Honors include induction into the Maryland Women’s Hall of Fame, and receiving the American Academy of Pediatrics’ Dale Richmond Award, the National Women’s History Alliance Award, Maryland’s William Donald Schaefer Helping People Award, First 5 Los Angeles’ Champion for Children Award, and Vice President Gore’s Hammer Award.

Emily Martin, Vice President for Education & Workplace Justice at the National Women’s Law Center (NWLC), oversees NWLC advocacy, policy, and education efforts to ensure fair treatment and equal opportunity for women and girls at work and at school and to forward policy frameworks that allow them to achieve and succeed, with a particular focus on the obstacles that confront women and girls of color and women in low-wage jobs. Prior to joining NWLC, Martin served as Deputy Director of the Women’s Rights Project at the American Civil Liberties Union, where she spearheaded litigation, policy, and public education initiatives to advance the rights of women and girls, with a particular emphasis on the needs of low-income women and women of color. She also served as Vice President and President of the Fair Housing Justice Center in New York City and previously worked for NWLC as a recipient of the Georgetown Women’s Law and Public Policy Fellowship.

As an author of fiction and nonfiction, Clare Smith Marash has written on topics ranging from particle physics to political music and has spent the last few years in documentary films, most notably “37 Words” a four-part series on Title IX for Trilogy Films and ESPN. Previously, she ran a literary arts organization that curated readings and events in New York City. She is a graduate of the University of Michigan, where she won a Hopwood Award in Short Fiction, and Columbia University, where she received a Masters of Fine Arts.

Thalia Charles (she/her) is a senior at Lafayette College studying Government & Law and Psychology. She is passionate about advocating for gender justice, reproductive rights, and feminism. Thalia has been a Policy Organizer on the Know Your IX team for two years. On her college campus, Thalia serves as the President of LRAJE, her school’s only reproductive, sexual, and menstrual health organization, and the Vice President of Student Government. In her capacity in the latter role, she spearheaded a Menstrual Equity Pilot Program to provide free and sustainable menstrual products in academic buildings across campus. She is also a Pards Against Sexual Assault peer educator. Her senior thesis explores judicial decision-making and the possible outcome of Dobbs v. Jackson Women’s Health Organization, a potentially landmark Supreme Court decision.