Thurs, May 6 – Jews In Greece: The Orphans of the Holocaust 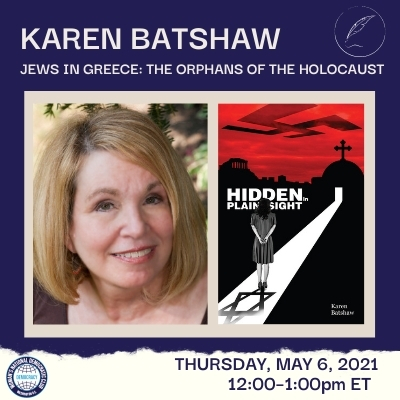 Local author Karen Batshaw will present the story of Greek Jews during World War II, often referred to as the “orphan” of the Holocaust. After meeting a Greek Jewish man who told her of his family’s survival through the help of Orthodox Christians, Karen authored Hidden in Plain Sight and Light and Shadows, detailing the occupation of Greece by Italy, Germany, and Bulgaria, and the Jewish struggle to resist annihilation. The holocaust of the Greek Jews is often referred to as the “orphan” of the Holocaust. Hidden in Plain Sight, a meticulously researched historical fiction novel, shines a light on the plight of Greece’s Jews and the brave attempts of the Archbishop of Athens to protect them. Karen will share a power point presentation and will have a question-and-answer session after presenting her historical research.

A world traveler currently residing in Washington, DC, and Williamsburg, Virginia, Batshaw has a bachelor’s degree in Anthropology and a master’s degree in Social Work from the University of Pennsylvania. She also developed an international program for adoption in Cambodia. Her previous books include Love’s Journey, Kate’s Journey, and Echoes in the Mist. It was her immersion in Greek culture as part of her research for Echoes in the Mist that led her to the tragic story of Greece during World War II. Batshaw has given presentations on this history of Greece during the 20th century, as well as presentations at Greek Orthodox Churches, Synagogues, book groups, and adult education programs.