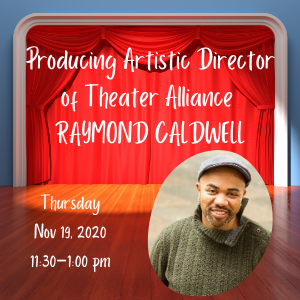 Social Role of the Arts Series

This fall’s theme—Confronting Racism In and Through the Arts

For the third program in our series, Director Raymond Caldwell will discuss the role of cultural institutions in facing the racial awakening occurring in the US. How are they dealing with demands for equity when their staffs and boards remain predominantly white? And how are they grappling with the fact that their audiences tend to be predominantly white, upper-middle-class, and dying?

Mr. Caldwell took over the role of Producing Artistic Director at Theater Alliance, the resident theater of  the Anacostia Playhouse, in January 2019, and proceeded to run away with eight 2020 Helen Awards, seven of them for his first production with the theater in early 2019, “Blood at the Root”. The pandemic interrupted his production of “The Bitter Earth” in mid-run, but other activities continue along with planning for the future. His previous distinguished career includes being resident-director and professor in the Department of Theatre Arts at Howard University.

Click here to register for this insightful and thought-provoking installment of our Confronting Racism series!