Tues, April 27 – Biden’s Foreign Policy to Date: The Good, The Bad, and the Ugly 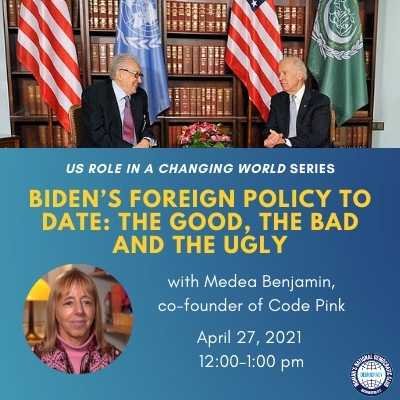 A US ROLE IN A CHANGING WORLD series program

Is Biden’s foreign policy already stuck in the militarist quagmire of the past 20 years? How can his administration be pushed to fulfill his campaign promise to prioritize diplomacy in our Foreign Policy? Addressing these questions in this US Role in the World series program will be Medea Benjamin, co-founder of the peace group CODEPINK and of the human rights group Global Exchange and author of Inside Iran: The Real History and Politics of the Islamic Republic of Iran. Medea is a charismatic speaker and this timely analysis should not be missed!

Click here to register for this installment of the US Role in a Changing World series.

Medea Benjamin, an advocate for social justice for more than 40 years, is one of 1,000 exemplary women from 140 countries nominated to receive the Nobel Peace Prize on behalf of the millions of women who do the essential work of peace worldwide. She is the author of ten books, including Drone Warfare: Killing by Remote Control and Kingdom of the Unjust: Behind the U.S.-Saudi Connection. Inside Iran is part of a campaign to prevent a war with Iran and instead promote normal trade and diplomatic relations. Her articles appear regularly in outlets such as The Guardian, The Huffington Post, CommonDreams, Alternet, and The Hill.