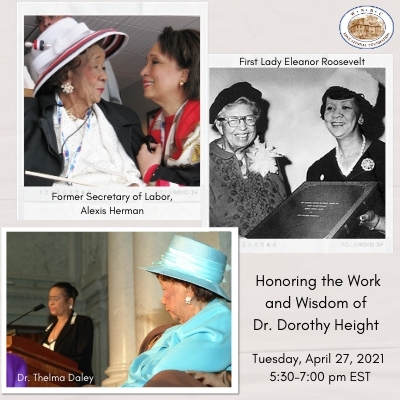 Join us for a conversation with Former Secretary of Labor Alexis Herman, Dr. Thelma Daley and Anna Eleanor Fierst about the civil rights activist and historical icon Dorothy Height. The conversation will include excerpts from the speech by Dr. Height  —sponsored by the WNDC Educational Foundation on April 27, 2004—that still resonate today. Brought to you by the WNDC Educational Foundation.

Dr. Dorothy Height was an activist on behalf of civil rights, women’s rights, and an early advocate for highlighting “intersectional” needs of black women in particular. Height is credited as the first leader in the civil rights movement to recognize inequality for women and African Americans as problems that should be considered as a whole. Height met Mary McLeod Bethune and Eleanor Roosevelt at a meeting of the National Council of Negro Women (NCNW) held at the YWCA. In her 2003 memoir, Height described the meeting: “On that fall day the redoubtable Mary McLeod Bethune put her hand on me. She drew me into her dazzling orbit of people in power and people in poverty…. ‘The freedom gates are half ajar,’ she said. ‘We must pry them fully open.’ I have been committed to the calling ever since.”