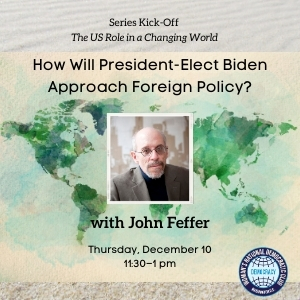 THE US ROLE IN A CHANGING WORLD

Although he will face considerable opposition from Republicans in Congress to his domestic agenda, the new president will have more leeway on foreign policy. President-elect Biden has already promised to return the United States to the World Health Organization and the Paris Climate Accord. Beyond his initial executive orders, what vision of the world does he bring to the White House? Will it be simply a return to the Obama approach, or does Biden have a more transformative platform? John Feffer will look at Biden’s approach to US allies in Europe and Asia, his take on key competitors like China, and his views on the pandemic, the climate crisis, and the global economy.

John Feffer is a frequent and popular presenter for the Club. In addition to his day job, he is a recognized novelist, playwright, and performer, using the arts to add more dimensions to dealing with social issues. He’ll bring foreign policy issues alive!