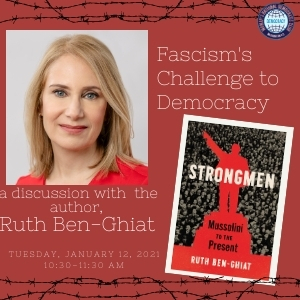 Dr. Ruth Ben-Ghiat is a historian, educator, and expert on fascism, authoritarian leaders and their propaganda, and the threats they pose to democracies around the world. She is a professor of history and Italian studies at New York University. Her just-published book, Strongmen: From Mussolini to the Present, catalogs a history of tyranny under authoritarian leaders who promised law and order, but once in power enabled lawless behavior by financial and sexual predators.

In Strongmen, the elites are the authoritarian’s most important promoters and collaborators. To preserve their power and authority, elites strike an “authoritarian bargain” in return for their loyalty to the leader and toleration of his suspension of their rights. It reveals how these leaders think and act, who they depend on, and how they can be opposed. Once in power, the strongman controls and exploits everyone and everything for his personal gain. The demise of truth and democracy advance hand in hand. Once his supporters bond to him and his persona, they cease caring about his lies. They believe him simply because they believe in him.

Ben-Ghiat points out that authoritarians hold their greatest appeal when society becomes polarized into two opposing ideological camps. In her presentation, the author will examine the post-election maneuvers of Trump and the GOP and how they are indicative of an authoritarian political culture. Finally, she will examine how America might reckon with Trump and his legacy, long after he has departed the White House.

Click here to register for this exclusive discussion with the author.