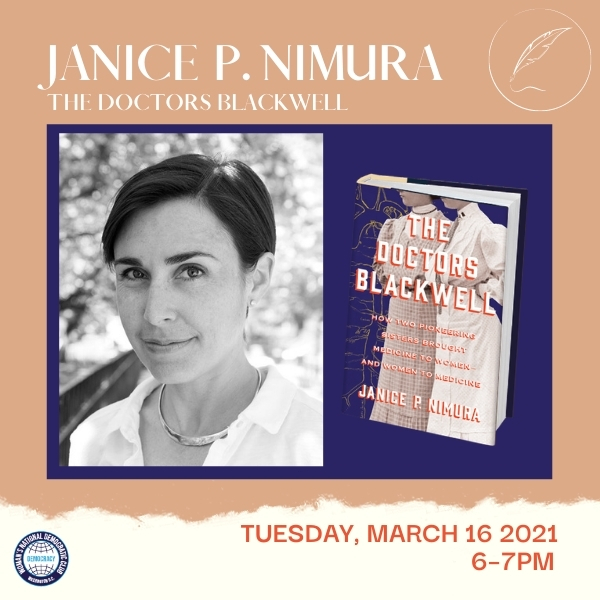 Janice P. Nimura has resurrected the story of Elizabeth and Emily Blackwell, the first and third female physicians in America. In 1849, the world recoiled at the notion of a woman doctor, yet Elizabeth Blackwell persisted and became the first woman in America to receive an MD. Her achievement made her an icon but her sister Emily, eternally eclipsed, was the more brilliant physician. Together they founded the first hospital staffed entirely by women, in New York City.
Both sisters were tenacious and visionary, but their convictions did not always align with the emergence of women’s rights―or with each other. They prevailed against fierce resistance from the male establishment, moving among Britain, France, and America during a tumultuous time of scientific discovery and civil war. This major new biography celebrates two complicated pioneers who exploded the limits of possibility.  Join us for a discussion with the author, discussing the shattering of a glass ceilings for women in the medical field, as well as the relevance of the Blackwells’ story to modern-day medical challenges.

Click here to register for this exclusive event with the author, Janice P. Nimura.

Janice P. Nimura received a Public Scholar Award from the National Endowment for the Humanities in support of her work on The Doctors Blackwell: How Two Pioneering Sisters Brought Medicine to Women and Women to Medicine. Her previous book, Daughters of the Samurai: A Journey from East to West and Back, was a New York Times Notable book in 2015. Her essays and book reviews have appeared in the New York Times, the Washington Post, the Los Angeles Times, Smithsonian, The Rumpus, and LitHub, among other publications.

“The one thing I know I’ll never be is a historian,” she told her college guidance counselor in 1988. She thought she wanted to be a doctor, but life intervened: she majored in English at Yale, worked in publishing, moved to Japan with her Tokyo-born husband, and completed an M.A. in East Asian studies at Columbia upon their return to her native New York. She grew into an understanding that history is made of stories and fell in love with archival treasure-hunting, especially when it led to the forgotten lives of border-crossing nineteenth-century women. Her first book grew out of her personal interest in the earliest encounters between Japan and the United States. In her latest project she circles back to her first interest in medicine, in the context of her work in women’s history.