Tues, May 18 – How America Squandered Its Cold War Victory 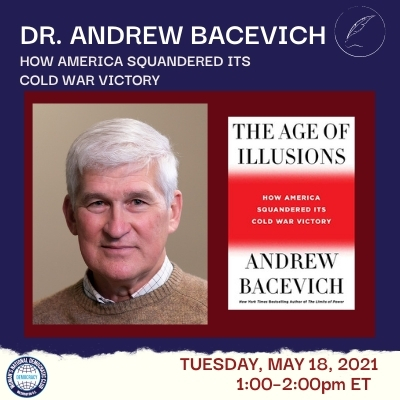 Army veteran, author, and Boston University professor Dr. Andrew Bacevich will discuss his latest book, Age of Illusions: How America Squandered its Cold War Victory. In The Age of Illusion, Professor Bacevich examines the political landscape of America from the fall of Berlin through the period of seeming ultimate victory during the long Cold War. At that time, the United States was experiencing unequaled prosperity, a lasting peace and optimism; it ended up with widening inequality, moral confusion, and a divided, angry citizenry. Bacevich posits that the Cold War did not bring “the end to history” but instead ushered in an era of American hubris and excess. It was a period that blinded our nation to reality, hobbled good governance and sowed the seeds of disenchantment and disappointment among much of the country. The result was the election of Donald Trump, who continued to spin out a tale of folly, deception, and delusion. Join us for an enlightening look into the past and forward into the future of international relations.

Register for this program by clicking here

Dr. Bacevich is a graduate of West Point who served in the U.S. Army for 23 years and retired with the rank of Colonel. He will discuss his latest book, Age of Illusions: How America Squandered its Cold War Victory. He also is the author of several other books on international relations including American’s War for the Greater Middle East: A Military History; Washington Rules: America’s Permanent Path to War and the Limits of Power: The End of American Exceptionalism.

He earned his Ph.D. in American Diplomacy from Princeton University.  He has held fellowships at the Paul H. Nitze School of Advanced International Studies, the John F. Kennedy School of Government, and the Council on Foreign Relations. Before joining the faculty of Boston University in 1998, he taught at West Point and Johns Hopkins University

Professor Bacevich is also the author of numerous essays and reviews in a variety of scholarly journals and general interest publications including The Wilson Quarterly, The National Interest, Foreign Affairs, Foreign Policy, The Nation and The New Republic, with Op-Eds in the Washington Post, New York Times and the Wall Street Journal.