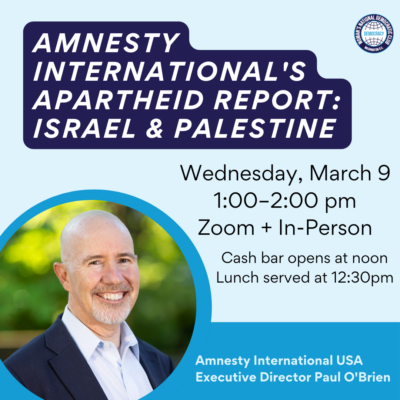 Join us in person at the Club or attend via Zoom. At the Club, the bar opens at noon, and lunch is served at 12:30 pm.

Paul O’Brien, new Executive Director at Amnesty International USA, will discuss international human rights law and evidence put forth in Amnesty’s recently published research report, Israel’s Apartheid Against Palestinians: Cruel System of Domination and Crime Against Humanity. In the report, Amnesty posits that Palestinians are being systematically dispossessed of homes and land, deprived of social services, and seeing their communities fragmented, and their families separated. Click here to learn more about the report.

O’Brien is based in Washington, DC.  Previously, Paul was at Oxfam America. During the pandemic, Paul co-led Oxfam’s worldwide influencing network’s efforts to change government policies, corporate practice, and public opinion. For the last decade, he oversaw Oxfam America’s advocacy with the US government and corporations. He has been an advisor to the President of Afghanistan, the Africa Policy Advisor for CARE, and an organizer in Nairobi’s informal urban settlements. He co-founded a community organizing institution in Kenya and a human rights research consortium in Afghanistan. He was the President of the Echoing Green Foundation, a litigator in New York for Cravath, Swaine, and Moore. He has a JD from Harvard Law School and has published on power and rights for more than three decades.  He recently published “Power Switch” How We Can Reverse Extreme Inequality.” Click here to learn more about the book.