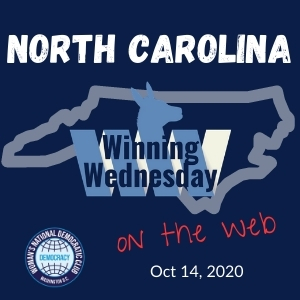 Join us as we “go” to North Carolina in support of US Senate candidate Cal Cunningham and US House candidates Kathy Manning and Pat Timmons-Goodson.  Excitement abounds in North Carolina—great as Democrats see it as crucial to their bid to capture the Senate majority in November.

Outside groups from both parties have poured millions of dollars into the state in anticipation of a brutal fall campaign season. Most polls have put Biden at least three points ahead of Trump since mid-April, sometimes as many as seven points.

Significantly, there are signs that the very Red state may be turning against Trump. The Trump-blessed incumbent was beaten in the GOP House primary, which does not bode well for GOP turnout hopes in November. On the other hand, NC Democrats saw a huge increase in turnout in the 2018 midterms. Pundits say the GOP has largely maximized its base turnout, but as the state turns more urban and experiences increases in numbers of people of color, Democrats still have many new pools of voters to tap into—and a plan to do so!