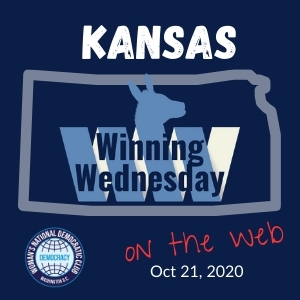 Join us “in” Kansas to support US Senate candidate Dr. Barbara Bollier!  Despite winning Kansas by 20 points in 2016, Trump’s approval rating there has sunk. Democrat Laura Kelly handily won the Kansas gubernatorial seat in 2018 — the same year that Democrats also flipped a traditionally Red House seat in Kansas City. Pundits attribute this to a hunger for moderation among Kansan voters, which seems to be continuing in 2020. Most recently this was seen in the GOP primary in which a hard-core conservative contender lost to a more moderate one.

Some polls see Biden and Trump as relatively close in Kansas, though most major polling outfits see it as competitive but leaning Republican. More than half of voters identify as moderate or liberal, and Kansas has an increasingly urban and suburban, rather than rural, population. Analysts are seeing these suburban voters as becoming more and more disillusioned with the GOP of today, and note that many of them voted for Democrat Laura Kelly for governor.