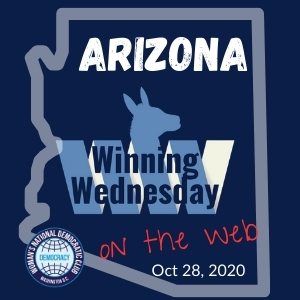 We are phone banking every day until the election – just one hour makes a difference! Click here and join us for one shift of outreach to undecided voters who should hear your story.

October 28th marks the last Winning Wednesday before the Election!  We go back to Arizona for a final push for Senate candidate Mark Kelly and House candidate Hiral Tiperneni, MD.  Arizona’s recent promising shift towards Democrats only seems to be increasing! This shift is remarkable. Other than Bill Clinton’s 1996 win, the state has voted GOP for president since 1952. However, as of late July, fully 71% disapprove of the job Republican Governor Doug Ducey is doing with COVID-19. This number is echoed in polling around strong disapproval of Donald Trump. This is an encouraging echo of 2018, when moderate suburban voters and young Latinos together brought in a Democratic Senator in 2018 for the first time in thirty years.

The Senate seat up this year has similarly encouraging numbers for the Democrat. Arizonans are registering to vote in high numbers, particularly young Latinos—24% of the state’s electorate—who are angered by Trump’s anti-immigrant rhetoric. This is still a swing state, not a slam dunk, and AZ has a history of hard-core conservativism, particularly on immigration issues. After all, that’s where “papers, please” started. But numbers show that Arizonans increasingly are calling and mobilizing for real change. WNDC can be part of flipping AZ!