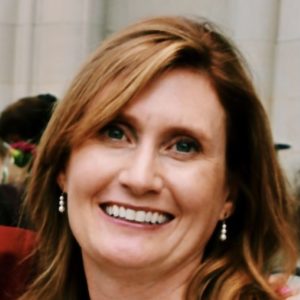 Michelle has been an active member of the WNDC’s GOTV Committee since 2019, working with the Winning Wednesday team of activists. After earning a BA in Political Science and JD from the University of Buffalo (UB), she began her career as a litigator before moving to the DC area to work as Legislative Counsel for US Congressman John J. LaFalce (D-NY 29th). She went on to serve as VP, General Counsel & Corporate Secretary for the American Cleaning Institute, a DC-based trade association, for nearly a decade before starting her second career as a yoga studio entrepreneur, founding Grace Studios in 2014.
She has served on executive committees at Woodlin Elementary and St. Andrew’s Episcopal schools, as well as Chair of UB Law School’s DC Alumni Chapter. Michelle lives in Silver Spring, MD, where she raised her two college-aged children, Robyn and Callie, with her husband Brian and two dogs, Coco and Lucky.