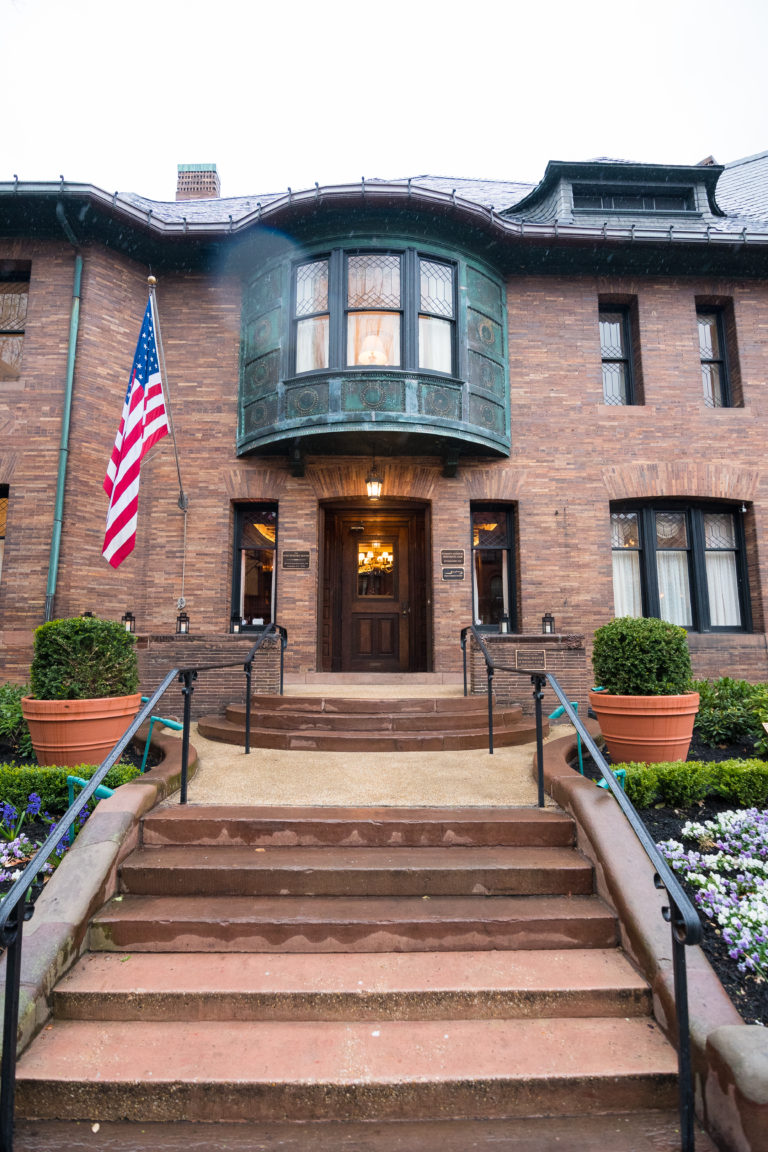 The Whittemore House, home of the The Woman’s National Democratic Club, is an elegant historic mansion located in Washington’s Dupont Circle neighborhood. Built between 1892 and 1894 as a private residence, it was designed by Washington architect Harvey L. Page (1859-1934) for opera singer Sarah Adams Whittemore, a descendent of the well-known Adams family of Massachusetts, and William C. Whittemore, her second husband.

Several well-known occupants have lived in the house. In 1903 Senator John F. Dryden (1839-1911), a Republican from New Jersey and one of the founders of Prudential Insurance Company, rented the building. Dryden was a member of Congress from 1902 to 1907. The best-known tenant was banker John W. Weeks (1860-1926), a Republican Congressman from Massachusetts (1905-1913), who leased the Whittemore House from 1907 to 1911. Later he was elected a Senator from Massachusetts (1913 to 1919) and served as Secretary of War under Harding and Coolidge (1921 to 1925). Mrs. Whittemore died in 1907, and left the property to her son and daughter. Her son, Walter D. Wilcox, an explorer, travel author, and photographer, moved his family into the home in 1919, living in the mansion until 1926. The house has been known as the Weeks House and as the Wilcox House in its history.

The Whittemore House has a kinship to both the English Arts and Crafts movement and American “Shingle Style” architecture. It shares with these movements a retreat from the beaux-arts style that dominated the Washington landscape in the late 1800s. The design of the Whittemore House suggests that Page was in tune with the most advanced architectural thinking of his day, which emphasized the elimination of non-essential decorative details in lieu of simplicity of form and an open free flowing interior plan. The house was also one of the first in Washington to be electrified.

The detailing of the Whittemore House is exquisite. A punched-and-tooled copper-covered oriel bay hangs over the New Hampshire Ave. entrance, its dull patina a compliment to the richly mottled Roman Brick. The brick is unique, taken from a small rare clay deposit in New Jersey that can never be produced again. Doors and leaded glass windows are set deeply into brick walls without additional ornamentation. Variety is achieved from subtle variations in the finely crafted brickwork, producing flat rarely interrupted surfaces that are associated with the Shingle Style. The flat walls meet to form angular towers and bays in the asymmetrical facades of the house. The flowing cape-like curves of the high roof covering the polygonal towers, bays, and eyelike dormer windows recall a more organic building form, the thatched roof, but is instead constructed of English slate, outlined by handcrafted copper gutters.