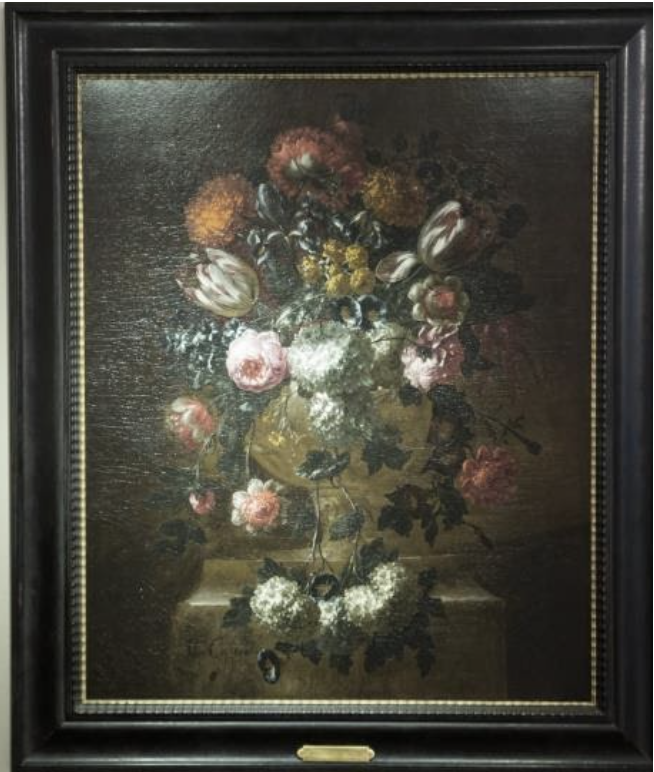 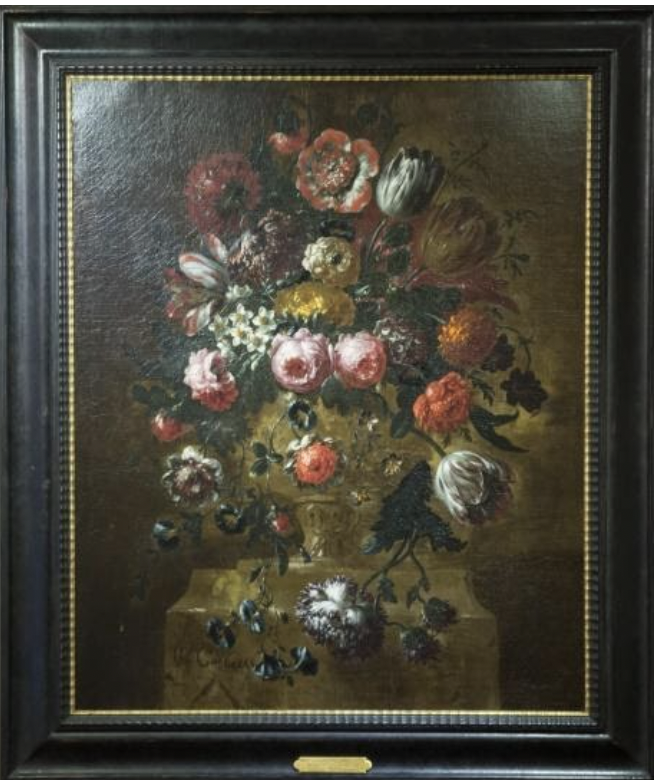 These two floral paintings represent two of the oldest pieces in the collection at the Woman’s National Democratic Club. Painted in oil, the pair portray large bouquets of roses, tulips, and zinnias in multiple states of bloom. The colors are relatively muted, though the flowers are rendered in meticulous detail to draw the viewer’s eye to each petal and bloom.

This pair of floral still-lifes reflect the mass popularity of Dutch flower paintings starting in the late 16th century. Since the early modern period, the genre of still-life presented table settings of food or flowers. These works were associated with the concept of vanitas, a Latin term that refers to the idea of life’s transience or temporariness. It might also be paired with memento mori, a trope of an object like a skull that reminded the viewer of one’s mortality. The flowers, for example, are seen in various stages of bloom to remind the viewer of the fleeting nature of life. It might seem macabre or strange for such a beautiful painting to carry such a dark undertone. However, painting a still-life was also a way for artists to represent sacred or Christian morals without direct Biblical reference, in line with the turn away from such explicit religious iconography following the Protestant Reformation. Additionally, scholar Paul Taylor discusses how mimetic or naturalistic art, especially of flowers, was connected to a glorification of the height of God’s goodness and the loveliest object of His power as the maker of the universe. While twenty-first century viewers may simply see a bouquet of flowers (rather commonplace today), Casteels’ viewer might have seen a reminder that to live a holy, moral life as a Christian in the one life they have on Earth.
In addition to these layers of significance, flowers in and of themselves had multiple layers of interpretative meaning depending on the audience. For the artist Pieter Casteels III, the inclination towards naturalism in still-life represented his skills and his craft. This display allowed the artist to attract further patronage or collectors of his work. For the patron who owned this pair of paintings, the flowers were a luxury item as much as the painting that captured them. The flowers in one’s home revealed one’s connections to distant shores and blooms and the money to pay to have them in their home. Paintings such as these also captured botanical diversity, a sort of memorial to the wealth of their gardens and that in their coffers. By this time in the early eighteenth century, floral still-lifes were becoming more extravagant. The delicate and meticulous portrayal of the flowers was juxtaposed with an elaborate table full of other luxury objects such as Turkish rugs, Venetian glass, and silver goblets. This reflects the shifting levels of refinement and elegance being emulated by the middle class and aristocratic members of European society.

While Pieter Casteels III was born in Antwerp, the artist spent the majority of his career (and life) in England. He was a member of two local clubs of artists near London, making a career as a painter of flowers and exotic birds. Most of his work was more functional than these canvas works, his primary trade in decorating chimney pieces, designing for prints, and later in life, for textiles in Richmond, near London.

Now in the Hamlin Room, these two flower paintings were donated to the Woman’s National Democratic Club by Florence (Daisy) Harriman, a co-founder of the club.

Jenna Wendler is a Second-Year MA Student in Art History at American University. She was one of the WNDC’s Visual Arts and Museum Affairs interns during Summer 2021.