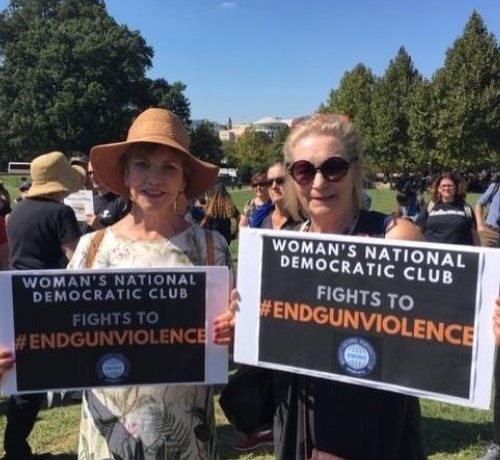 The Gun Violence Prevention Task Force (GVP) works to raise awareness and action regarding the needless bloodshed from gun violence.  The GVP promotes and advocates for common-sense gun reform at the national, state and local levels; raises awareness of and supports candidates for public office who commit to gun violence prevention legislation as the best vehicle to ensure public safety; informs and educates WNDC members on important developments surrounding the issue of gun violence; and provides a forum for political action and networking.

The GVP successfully networks with local and national gun violence prevention groups like Moms Demand Action, Everytown for Gun Safety, Brady: United Against Gun Violence, and Giffords: Courage to Fight Gun Violence.  We welcome members who want to raise awareness and work collaboratively with partners who advocate the end of gun violence.

Click Here to Read the 2020 Positions on
Gun Violence Prevention

Is it the GUNS or the HATRED?

Is it the GUNS or the HATRED? By Karen Pataky, Director, Public Policy & Political Action Committee So, we are only 6 months into 2022 and America has endured 200

PPC Statement on the Carnage in Buffalo

It is obscene and maddening that the country must process yet another senseless, bloody weekend. Ten innocent people were slaughtered and three wounded at a Buffalo supermarket brought about by a

Baseball or Neighborhood Shootings? America’s Pastime seems to be either baseball or neighborhood shootings! Andrew Patrick, political communications director for the Coalition to Stop Gun Violence, referred to “shootings replacing

On May 14, the final Letter to US Senate Judiciary Committee on the Nomination of David Chipman for ATF Director was submitted on behalf of a coalition of gun violence prevention